The archives of the new building (Public Archiving House) :

Registers of births, deaths and inoculations :

These registers include all the births and deaths nationwide. Some registers, beginning with those of Damietta, date back to 1838, while all registers at the PAH end with 1961. However, som registers have not been delivered to the PAH until now . 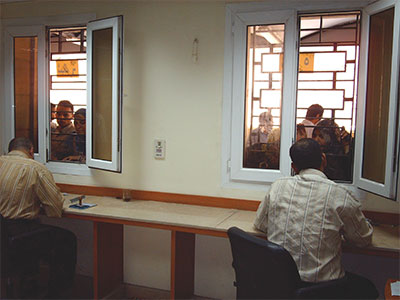 Documents of other ministries :

Public Authority for Insurance and Pension :

Files of the celebrities :

- Files of the artists and authors :

- Files of Al-Azhar men of religion :

- Files of the politicians :

- Records of medical committee in Cairo .
- Registers of births and deaths with all their various types .

Ministry of Irrigation and Public Works :

- Portfolios of governmental properties .
- Survey maps (it is worth mentioning that the restoration of Taba was due to the help of a map kept in the Public Archiving House) .

Ministry of the Public Ma’aref (old name for the Ministry of Education) :

Procedures to get a document at PAH :

- An application concerning the type of the document required is written .
- The application is delivered to the administeration of Al-Mokalafat that searches the database for the presented application and extracts the required document and gives it to the applicant .