Real-estate tax is not a new tax

The new building tax law does not levy new tax, as it is a tax that was already levied per Law 56/1954. Law 56 had been valid until the new law was ratified. Citizens pay this tax under the name the community knows as "revenues. The rules of this type of tax are re-organized as per the current law.

The taxpayer is the natural person or the legal person who has the right to own, use or utilize the property, where the tenant is not considered a taxpayer, but is a joint partner with the taxpayer to pay the tax within the approved lease.

This tax applies to all properties established on Egyptian land other than the non-taxable properties, whether rented or occupied by the owner himself who is the taxpayer, whether they are finished and inhabited, finished and uninhabited or inhabited and unfinished. This means that all current established properties are taxable, whether established villas, buildings, floating houses or chalets whatever their locations are.
The tax is also levied on space land used for garages, arboretums, rented and others, and tax-exempted if not utilized.

Also taxable are the structures established on roofs or buildings interfaces if rented or they are for rent or utilization. It is meant by the property in the new law each residential unit in a building not the whole building.

The non-taxable real- estates are as follows:
a - State-owned buildings specified for public utility and state-owned buildings as private possession, provided that they are taxed as of the beginning of the month following the selling out of these buildings to individuals or legal persons.
b - Buildings allocated for performing religious rites and religion learning.
c - Buildings that are expropriated for public utility as of the date of actual seizure by the authorities taking over the ownership.
d - Courtyards and cemeteries.
Buildings under construction are also non taxable.

Tax-exempted are:
a - Buildings owned by societies registered according to law, and labor organizations, specified for the management offices or for the purposes they were established for.
b - Non profit educational buildings, hospitals, dispensaries, orphanages, charities
c - Headquarters owned by political parties and syndicates provided that they are used for the purpose they were established for.
d - Units, whose net annual rent is less than L.E. 24.000; and taxed if the rent exceeds this limit, taken by the taxpayer as a prime residence for his/her family. The word 'family' to apply this law article includes the taxpayer, his/her spouse and the minor children.
e - Each unit in a building used for commercial, industrial, administrative or professional purposes whose net annual rent is less than L.E. 1200, and taxed if the net annual rent exceeds this limit.
f - Youths' and sports' centers established according to the organizing laws.
g - Real-estates owned by foreign governmental authorities on condition of reciprocity.
h - Non-profit houses used to hold social occasions.
i - Clubs and hotels affiliated to the Armed Forces, military houses of forces, complexes, medical centers, and hospitals and the buildings established within their domain, in addition to the units which the Armed Forces Operations Authority suggest upon a decision ratified by the Minister of Defense in accordance with the concerned minister. In all cases these quarters do not subject to the works of the survey and estimation committees as per considerations of defense affairs and national security requirements.
The new law has kept the prescribed exemptions for the buildings governed by rent pricing systems as per rules of Law 49/1977 and Law 136/1981 and the laws related to places rent ratified before them until re-estimating these buildings as soon as the rental relationship is lawfully terminated.

Procedures taken when de-taxation reason is no longer exist

The unit whose net annual rental value is less than L.E. 24000 and taken by the taxpayer as a main residence for his/her family is tax-exempted. The taxpayer should submit a form 6 demand exemption and real-estate declaration in form 6 (duplicate) that states all the units owned or used by the taxpayer nationwide.

Limit of tax-exemption for non-residential units

Tax-exempted is every unit in a building, used for commercial, industrial, administrative or craft purposes, whose net annual rent is less than L.E. 1200.

If any case of tax termination exists, taxpayer has the right to apply to the tax levy and collection office paying a L.E 50 insurance (as a proof for the seriousness of his/her application), also submitting the receipt of the last installment of the due tax, before considering the application.

Usual procedure in case the termination cause does no longer exist

If termination tax causes do no not longer exist, the taxpayer should notify the RT office within 60 days as of date of termination of the cause. This is to re-levy the tax on the building that was levied before exemption as of the year following the termination of exemption cause, or else the taxpayer is considered a dodger and punished as the penalty stipulated in the law.

The date to submit the tax declaration

The taxpayer should submit the tax declaration for all the real-estates he/ she owns or utilizes once every 5 years within the five –year survey within the second half of the year preceding the survey.
In case the taxpayer has recently owns a new building or adds other units to his/her building (building other floors) and his/her building has previously been surveyed, he / she has developed the building that the rental value is affected, or he/she uses land that has been unused, he/she has to submit tax declaration by the end of December of the year in which the updates have occurred.
The period of submitting the tax declarations stated above might be extended upon a decision by the Minister of Finance, not exceeding three months.

The rental value is calculated by the survey and estimation committees. These committees are formed with RETA delegate as the head, a delegate of the governorate in which the building is located and one of the taxpayers within the jurisdiction of the committee, chosen by the concerned governor.

Bases of evaluating:
A. Geographical location: it includes:

How to know the estimated value of the unit

The rental value estimations are publicized in el-Wake'a el-Masryia official journal. They are also announced at public places and the RT offices in which the building is located. In addition, each taxpayer is notified with the rental value estimation of his/her unit(s) on form 3, prepared specially for this purpose, via a registered letter or delivered by employees of the taxation office.

Procedures of appeal against the rental value estimations

The taxpayer has the right to appeal against the rental value estimation of the building or part of it within 60 days following the date of the notification. The appeal request is delivered to RT directorate in which the building is located or to one of the affiliated RT offices for a receipt or via a registered letter sent to the RT directorate. The appellant is to pay L.E. 50 as insurance to consider his/her appeal, to be refunded when the appeal is accepted.

Fairness of the appeal committees

The appeal committee is created with an expert non-working previous or current employee at RETA as the head of this committee. It includes only one member representing the office of levying and collecting the tax, in addition to a consultant engineer in field of construction or an expert at real-estate estimation. The consultant or the expert is selected by either the engineering syndicate, Egyptian Financial Supervisory Authority or the Egyptian Central Bank among the enrolled at the syndicate, the Authority or the Bank, provided that the candidate taxpayer for the membership of the committee should be within the jurisdiction of the committee.
In case of considering the appeals submitted by the institutions stated in the last item of Article (13) the representative taxpayer for its membership is selected by the federation of Egyptian Industries or the concerned Federation of Chambers or upon the nomination of the concerned minister as for the authorities which have not established federation. The candidate should have experience in the field of activity.

25% of the governorates tax revenue is to be directed to the fields of education and health. 25% of the whole tax revenue will be spent on developing slum areas.

The tax payers - or their heirs – Whose social conditions have changed and are not able to pay the tax are to present an application to the real estate governorate - which the building is located in its jurisdiction – so that the public treasury is to pay the tax on their behalf. The application must include the details of those social changes accompanied by the formal documents that prove them. The committee which is formed for that purpose is to make the decisions concerning those applications.

If the delay in tax payment is due to the real estate tax authority; no fine is to be imposed as the delay fine stated according to item 27 of the law mentions that the fine is paid only in case the taxpayer is the reason of delay.

Calculating the tax on the first residential unit in the light of the republican decision 117/2014 (with exemption limit of L.E. 24000)

Calculating the tax on the non- residential unit (administrative/commercial) in the light of the republican decision 117/2014 (with exemption limit of L.E. 24000)


Examples to calculate the real-estate tax 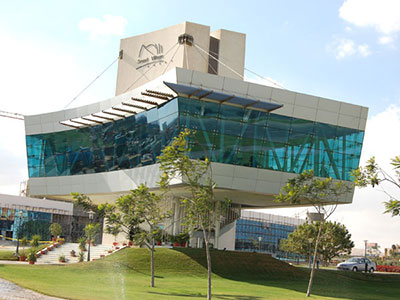